Creativity Born From A Random Conversation

Sometimes, the way my mind works is an intriguing thing.

I recently stopped by my friend Naomi's house with my friend Brandy after an afternoon shopping trip. We were sitting out on the back patio discussing various things and it got onto creative endeavors, which is often a topic that comes up since both of them keep up on my latest projects. Naomi said something about how she's not creative thinking at all. And how she would look at a tin can and some twine as junk but that I could look at a tin can and some twine and make a phone or something really creative and awesome. I made both Naomi and Brandy laugh when I said that I would turn a tin can and some string into a really cute vase (because I recently saw someone take twine and use it around a glass vase and it seemed pretty cute.)

Skip ahead to several hours later, in between which: I took Amazing Boyfriend to eat at his favorite restaurant, then to the grocery store, finishing 3 pretty easy craft projects while ABF watched Iron Man 2 (because I'd already seen it) , taking suitcases to my sister because hers was too small and having a cocktail with her. I decided, what the hell.

Why don't I make a vase out of a tin can and twine? 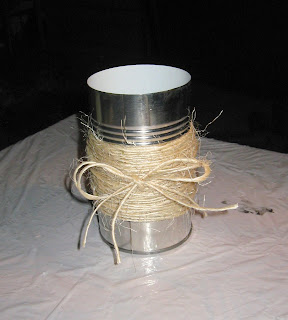 Pretty cute, huh?
The best part about this random project is that I already had everything I needed to make it. Tin can, twine and my glue gun, Debra. 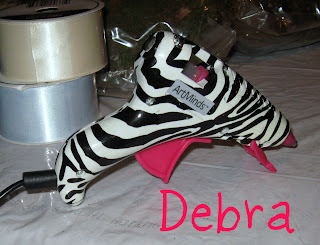 I was going to put flowers in it, but then I decided that it would be a really cute way to hold my paint brushes. At least it's better than the Jack in the Box cup that they're were in. 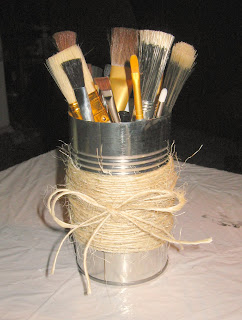 Ah, so much better!
So the lesson here is, don't give your creative friends random ideas because you never know when they might actually follow through with them. Especially if you're a friend of mine.
Posted by Bethany @ A Fish Who Likes Flowers at 2:06 AM