Five years ago on March 1st my kitties, Jack and Mali were born. 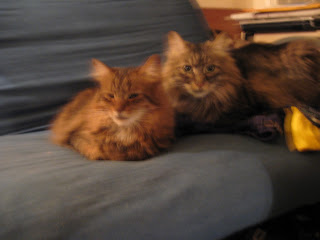 If you've never heard this story before, allow me to enlighten you to the story of their birth and how they have been with me since day one.
My Mom's cat Layla got knocked up. She accidently got out before my Mom got her spayed and when she came back in it was already too late. At the time, I was living on the couch at my Mom's house. Layla liked to hang out in my brother Tommy's room, and he had even set up a little bed in there hoping that's where she would decide to have her kittens. Right around the time Layla was due to have her kittens my brother got mad at her and shut the door to his room.
I remember the night perfectly. I stayed up way too late and had to get up early to be at work by 9. Before I went to sleep Layla was perched on the arm of the couch, watching me. I remember thinking, please don't have these kittens tonight. It would be really bad timing.
I woke up the next morning before my alarm was set to go off. I didn't know exactly what had woken me up when I felt something squirm against the small of my back. I froze. Then carefully rolled out from underneath my blanket. Layla was working on getting out her fourth kitten, I could see it coming out. She had already had three of them and had pushed them against my back to keep them warm. She had literally had kittens right on me!!!
Layla had 5 kittens total. Three of the kittens were manx kitties which means that they have no tails. One of the manx kitties went to live with my Mom's co-worker Kristi, Jack and Mali came to live with me when I left my Mom's house, SoCo still lives at my Mom's house and Kiki disappeared awhile back. 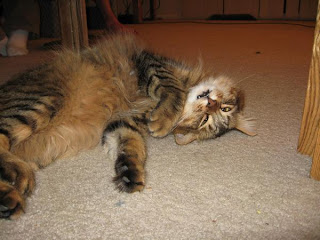 Silly Mali
Jack and Mali are two of the most adorable kitties ever. They are super friendly, always wanting to be petted, scratched and loved. Yes, they have done things that piss me off (like peeing on the fouton) but we've always found a way to get along. 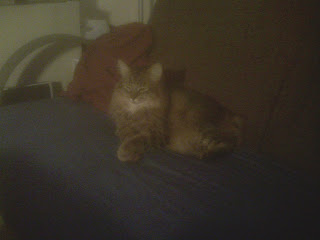 Mali on the couch
Mali is the most curious and affectionate one. He loves to rub his face on everything, especially other peoples faces. When he sits he'll cross his front paws, like he's posing, but he just does it naturally and always has. 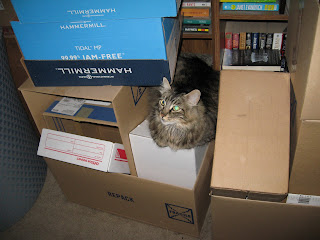 Jack hiding in our moving boxes
Jack is my little buddy. He's a little on the shy side and loves to hide. There has been times when my boyfriend won't see him all day, but within 10 minutes of my being home from work he'll come find me, snuggling up next to me on the couch. When I've had to sleep in our bed alone I can always guarantee that Jack will be sleeping at the foot of the bed when I wake up in the morning. 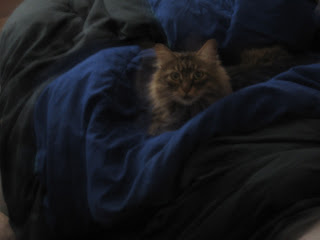 Jack hanging out on the bed
Now most of you are probably asking why the hell I'm blogging about my cats. I'm not turning into a crazy cat lady, I swear.
The reason that I'm blogging about my cats is because today I sent them with my Mom to go to their new home. Where I'm moving to already has two cats, and the boyfriend and I decided that two more people, plus our dog and two cats was too much to add to a household. This has been such a gut-wrenching decision for me. I've had Jack and Mali since they were born and I hate that I can't keep them, but I know that giving them up is the right decision. They are going to live with my Mom's co-worker Kristi, who already has their brother. They are going to a good home.
But my heart still aches a little that I have to give my kitties away. Everyone went back to Salem tonight, leaving me behind because I have to work in the morning. The house feels really quiet without my two little furry friends hanging around, and I sit here, blogging through my tears, eating sugar cookies, hoping to soothe my achy heart just a little.
Posted by Bethany @ A Fish Who Likes Flowers at 8:34 PM