"What Did You Just Say?"

The title of this blog post is a direct quote from Amazing Boyfriend as he was unpacking our shopping bag from the store. Most of the things inside it was his, so I left the unpacking of everything to him.
While we were at the store, I bought a reusable coffee cup, very similar to this one that I got for my Mom for mother's day. Except mine if bigger, and blue. I bought it with the idea to put a vinyl decal on it, or vinylize it, like I did with my Mom's. 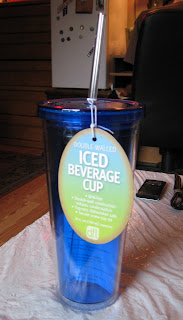 When ABF unpacked my coffee cup, he made a comment about it. I told him that it's fine because after I vinylized the cup it would be really cute.
"What did you just say?" was his response.

"Vinylize it. You know, with vinyl."
For some reason ABF thought this was the funniest thing he'd ever heard. I guess, vinylize sounds a lot like vandalize and somehow that's the correlation that his brain made when I said it. I guess, maybe it was a "you had to be there" moment.

So here is my new coffee cup, all cute and VINYLIZED!!! 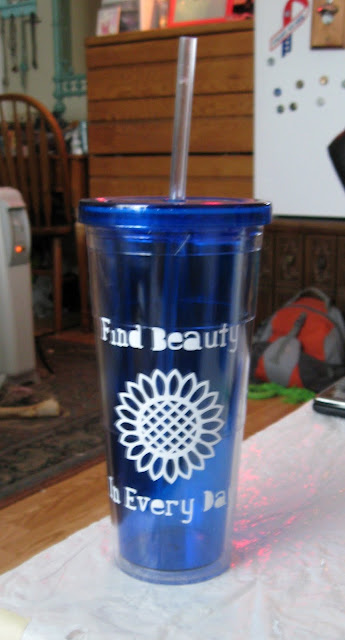 I think it turned out pretty cute!

I was having trouble coming up with what I wanted to put on my cup (because oh the possibilities!) but "Find Beauty In Every Day" has become a new manta for me lately, and I think it's a good one.
P.S. Boys are silly

Posted by Bethany @ A Fish Who Likes Flowers at 7:07 PM