Now that Amazing Boyfriend Fiance has officially asked me to marry him, we've picked a date (September 8th) and we have a location (my Aunt Barb's backyard), it's time to move on to more important matters.

Who's going to be my maid of honor?

ABF decided that he only wants one groomsmen, his best man. If he had to choose more than that, it started to get too complicated, so he decided to just choose one. Which meant I had the really hard decision of narrowing down the amazing, wonderful women in my life to choose just one.

My other bestfriend, Brandy Jeanne, who I've mentioned a few times before on my blog, and I have been the best of friends since she was 15 and I was 16. After I graduated high school, there were a few years where we lost track of each other, but when we reconnected again, it was like we've never stopped talking. She's been there for me every time I needed her and a few times where I didn't know I needed her, but was so happy that she was there for me anyway.


Therefore, Brandy Jeanne was my obvious choice for my one and only bridesmaid.


Although being the crafty, clever bride that I am, I can't just ask her! I had to come up something clever to ask her to be my maid of honor. 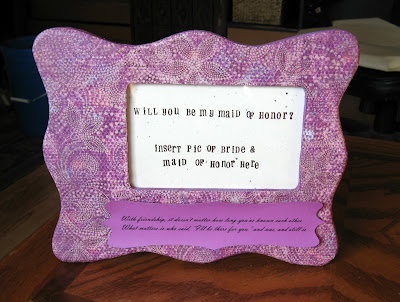 So I made her a picture frame so that after the wedding she can put a picture of us in it. 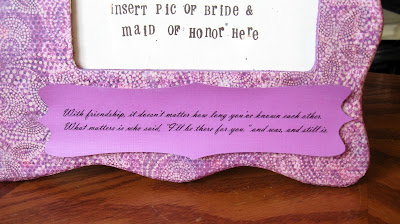 The quote I used was a shortened version of one I found online that says, "With friendship, it doesn't matter how long you've known each other. What matters is who said, "I'll be there for you." and was, and still is." I couldn't think of a better quote to describe our friendship.

(Although I was pretty sure that she would.)